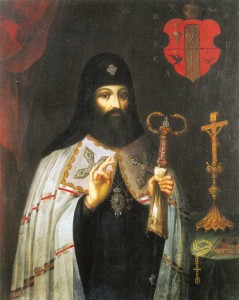 The great man, celebrated by the Church among the Saints, – Metropolitan of Kiev and Galicia, Petr (Mohyla, 1596-1647), a prominent church, political and cultural activist, an earnest adherent for Orthodoxy in a complex historical situation in Ukraine in the first half of XVII century, was the founder of the Goloseevsky hermitage.

In 1631 Petr Mohyla built the church in honor of Holy Martyr John the New of Sochava (the heaven intercessor of Petr’s kin) in his Goloseev estate. The family heirloom – “noble particle” of the Martyr’s relics and the reliquary cross for saints’ relics – were given by Petr for that church. A garden and a grove were planted near the church in conformity with the plan of the Holy Dormition Cathedral of the Kiev-Pechersk monastery, and all the territory was fenced around. From that moment the new abode (skit) – Goloseev desert (Goloseevskaya Pustyn)- was originated.

In 1632 Petr Mohyla was elected as Kiev and Galicia Metropolitan. In the same year he won the Polish king’s recognition of the independence of the Orthodox Church from uniates with the center of the Church in Kiev and a number of temples and monasteries were returned to the Church. He took an active part in the foundation of the Kiev-Mohyla Academy, the largest Ukrainian center of education in XVII century. Petr Mohyla was involved in the drafting of polemical treatises in defense of Orthodoxy, was the author of sermons and a hagiographer and paid the great attention to the development of publishing books. Also he published a lot of liturgical books with amendments, his own written compositions and church works that were personally translated by him. On his initiative the remains of the Tithe Church in Kyiv were excavated and cleared of rubbish and other ancient temples and monasteries including St. Sophia Cathedral, the Church of the Savior on Berestov, Vydubych and other monasteries were restored after the desolation and uniates’ ownership. In 1996 the Holy Synod of the Ukrainian Orthodox Church canonized Petr Mohyla as a saint.

1837-1857 were the years of prosperity for the Goloseev desert. That was the time when the Kiev metropolitan cathedra was held by St Filaret (Amphitheatrov, 1857). Father Filaret was an outstanding bishop, a theologian, and an ascetic who secretly took the great schema. Being a bishop of Kaluga, he founded the skit named by St. John the Baptist in the Optina monastery and made it be inhabited with the monastic elders. Upon becoming the primate of Kiev he revived the skit inhabitation in the Goloseev desert and rebuilt the monastery there.

By the St. Filaret’s efforts the metropolitan house with a house church in honor of St. John Suffering (of Kiev Caves), the Protection of Theotokos church with the two chapels in honor of the Martyr John of Sochava and the Three Hierarchs – Basil the Great, Gregory the Theologian and John Chrysostom, brethren house, household premises and the fence around the Goloseevsky monastery were built. The church of St. John the New of Sochava was renamed in honor of the Theotokos (Mother of God), called “Life-giving Spring”, and the abode (desert) became known as the Holy Protection of Theotokos Goloseev abode (desert) – on behalf of the main church of the monastery.

Under the Protection of the Mother of God the Saint Filaret and his confessor, the hieromonk Parthenius (Krasnopevtsev, 1855), had been living in Goloseevo for seventeen years. Early in the springs they arrived there and by late autumns they returned to the Lavra. During their lifetimes both of them were honored by people like the elders.

Many hours per day the saint Filaret prayed tearfully with the deep repentance and it was not easy for any other devotee. He did not sit at the table until the last poor was gifted, and his meal was much meager than for the brethren. He greeted everyone with love in his heart, particularly he liked monastics, seminarians and academics, but most of all he was keen to prayerful solitude.

Saint Philaret liked to pray long mostly in the Goloseev woods. The Bishop found the place there with the beautiful view for Kiev and the Lavra. Unseen by anyone he prayed for the salvation of their inhabitants and blessed them with the cross.

From the middle of the XIX century the Goloseev desert became the residence for the Metropolitans of Kiev.

The feats of the many saints had made the Goloseev desert famous. But the special place among them is taken by the Venerable Parphenius of Goloseev and Aleksiy of Kiev.

The Venerable Parphenius of Kiev (secular name – Peter Ivanovich Krasnopevtsev) was born on the 24th of August in 1790 in the poor family of a clerk in the village Simon of Tula province. He did not complete the course in the Tula Theological Seminary and went to the Kiev-Pechersk Lavra. There he was assigned for obedience tasks to the communion bread bakery. After that he was appointed as a head of communion bread bakery and he was fulfilling that obedience task for 12 years. Following the example of Venerable Nicodemus Prosfornick (Bread-Maker) he learnt the Psaltery and every day he read it by heart till the end of his life.

In 1824 Parphenius took the Cross of monasticism with the name of Paphnutius and was ordained a deacon, and after six years he became a monk-priest. In 1834 Parphenius was appointed as a confessor of Lavra.

In 1838 St Filaret (Amphitheatre) dedicated him in schema with a monastic name Parfenius – in honor of St. Parthenius Lampsakiysky. After that the venerable old man closed himself in a cell where the single window was blocked by him by the icon of the Mother of God. He had the most affecting love for the Mother of God and several times was honored with a vision of Her as well as with the other blessed phenomena.

Each day the venerable monk served the Divine Liturgy: by autumn and winter – in the Kiev-Pechersk Lavra, and by spring and summer – in the Goloseev desert where for 17 years he spent spring and summer time with Bishop Filaret. The elder Parphenius liked the Goloseevsky desert very much. He talked about is in such a way: “The spirit of the Caves’ Fathers runs here. And if there is any consolation and gladness on the earth, it is in the deserted silence. People distract us from God, and a desert approaches us towards Him”.

In 1855 on the Annunciation of the Theotokos the great ascetic reposed in the Lord. He was buried in the Goloseev desert, in the church in honor of the Mother of God “Life-Giving Spring”. In 1930 that church was exploded and the saint’s tomb was destroyed. At the present time his holy relics are located under the church.

In 1993 the hieroschemamonk Parphenius was glorified as a local saint of the Ukrainian Orthodox Church.

The Venerable Aleksiy of Goloseev (his secular name – Vladimir Shepelev) was born on the 14th of April in 1840, on the first day of Easter, in a large noble family. The boy was born dumb. By her heart his mother felt God’s providence in her son’s dumbness.

The sainter Filaret (Amphitheatrov) patronized a lot to the family of Shepelevs.  On the Easter of 1853 he blessed Aleksey’s mother to come with her son for the evening service at his home church. On his third greeting “Christ Is Risen!” the child replied: “Truly He Is Risen!”

After his recovering the boy was given for the education in the Kiev-Pechersk Lavra. By that time he was an orphan. Metropolitan Filaret took all the cares about his upbringing. And in virtue of it the young novice got the great religious and secular education, but most of all he learned from his benefactor to be full of mercy and compassion. The Confessor of the Bishop – the Venerable Parthenius of Kiev – taught the boy to pray and to be non-possessive.

In 1872 Vladimir took his vows as a monk with the name Aleksiy – in honor of the saint Aleksiy, the God’s man. And then upon becoming a celibate priest he was given the new obedience – spiritual nourishment of people.

In the Kiev-Pechersk Lavra the Father Aleksiy had been living for more than 38 years, but he had to leave it. He was transferred first to the Transfiguration desert and then to the Goloseev desert. In the Goloseev solitude the Venerable Aleksiy lived for more than 20 years and almost to the last day of his life his obedience tasks were to be a confessor and a sacristan. The monastic elder’s activity blossomed in the dessert. After the confession to him people regenerated, became happy and peaceful and found the meaning of their lives. Among the spiritual children of the elder were Metropolitans of Kiev and the monasteries’ governors, monks and secular persons, nobles and intellectuals, students and peasants, and for all of them the batushka was as their own father and consoler.

The day before his death the blessed elder handed the property to his spiritual children. On the evening of the 11/24th of March in 1917 he peacefully departed to the Lord. The dearest monk was buried at the eastern wall of the church in honor of the Theotokos called “Life-Giving Spring”. His grave soon became revered by people. And during the revolution and during the wars and persecutions for the Church and faithful ones there have always been burning lamps and candles and have ever been people. In 1993 year Aleksiy of Goloseev was glorified among the saints.